Kavita is a fast, feature rich, cross platform reading server.
Built with a focus for manga and the goal of being a full solution for all your reading needs.
Setup your own server and share your reading collection with your friends and family. Hello, I am the developer of Kavita. Would you mind updating the version of Kavita you are hosting? The version is so out of date. So many new features and fixes have been added. We are now on v0.4.9. v0.5.0 is coming up quickly offering full metadata support.

If you no longer want to maintain the image, please reach out and my team can take over ownership and maintenance of the image.

v0.5.3 is here and packed full of a collection of random features I wanted to build out for Kavita. I usually plan out the next few releases and stick to that schedule, adding in features that I want or users suggest randomly, but this time I wanted to sit down and take a release for myself to work on whatever I felt like, rather than what I had planned and it turned out to be really fun and some great additions came from it.
Let's start with what the discord community is abuzz about and that's the fated book reader refresh. Started last release but pushed due to complexity was a big refresh to the UX around the book reader and bringing one of our most up-voted feature request, calibre-like reading. Not only did we bring this reading mode to Kavita's reader, we also brought along new color themes for the reader for our OLED users, a font for Dyslexic users, and immersive mode, which hides the menuing system and lets you focus just on your book (goes great with column layout). It's been great iterating on the book reader since it was first built. I can't wait to see how it evolves and is polished further in later releases.
Next is my personal favorite and another coming from feature request, Series relations. Isn't it really annoying reading a series and not knowing what the next series is or what spin-offs exist? Well, now you can configure this into Kavita. From any series you can configure relationship links to other series, like sequels, prequels, spin off, side story, alternative version, etc. There are many links to choose from. You can see a little teaser of it below. Jump on our wiki to learn more about the feature. 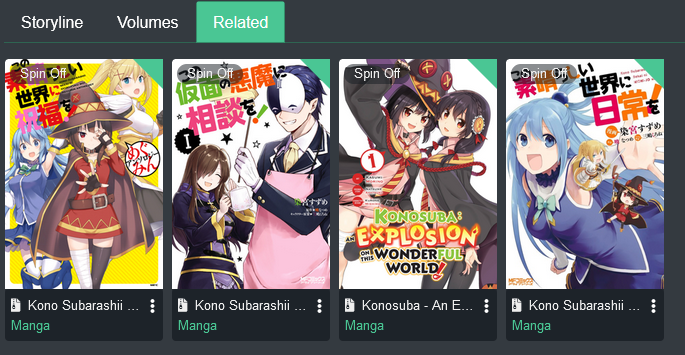 Another killer addition is a big update to our search. You spoke and I heard you, you can now search for individual titles (book or manga/comics) and for individual files in addition to series, genres, people, tags, reading lists, libraries, collections, etc. This was tricky to implement and still retain the non-functional requirement of everything responding under 300ms. There should be no issues with you finding things in your server.
Wrapping it up is a few small but powerful ones. Likely you've seen it a few times in your logs, but the old constraint issue. I finally was able to track it down and squash it for good. It ended up being an index in the database that wasn't actually being used. Another one is the extra white space on the right side of the card grid system. Robbie was able to drive a beautiful solution and it works just as I envisioned. Lastly, On Deck was tweaked yet again to try to achieve a good balance of how I want it vs how I can actually code it and we have found a good compromise that works.
As usual, the release is packed with many things, so read through the changelog. To close off, I want to say thank you for all the support and suggestions to help shape Kavita. I have a lot of ideas that I want to see realized and really appreciate the inputs that have helped us build out Kavita.
Note: Kavita releases will slow down for a while as I have taken a new job. I am still committed to bringing my vision of Kavita to life, so don't worry about this project dying. I use Kavita daily.